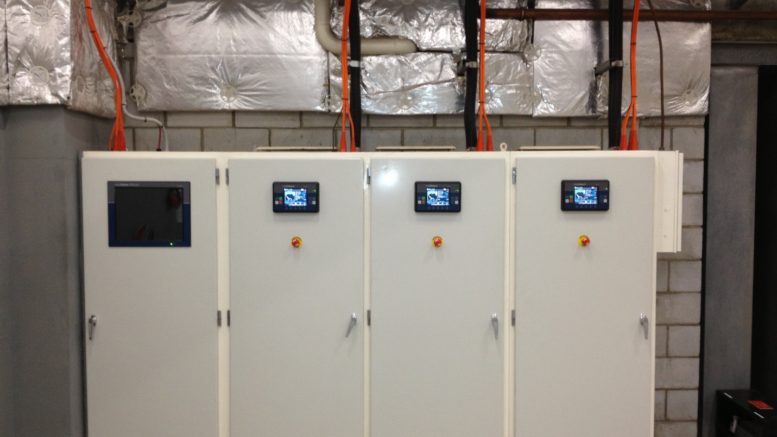 In all of the major cities and regional towns of Australia there are thousands of standby sets. These sets have the potential to be the most effective form of demand management available but are greatly underutilised as they are not set up to act in this role.

Why is the use of standby sets so effective? It is the only form of demand management that does not require the customer to make compromises. The solution is completely transparent to the customer – no one except the building manager is even aware that the buildings load – totally or partially – has been transferred from the network to the standby set.

Regrettably, there is no detailed listing of all of the standby sets in Australia. Fortunately, some work has been done in NSW and it is possible to extrapolate this data to a certain extent, but the work was done in the mid to late 2000’s and has become considerably out of date.  In 2005, the NSW Department of Energy, Utilities and Sustainability (DEUS) carried out a survey which found that there was 375MW of standby plant in the Sydney area[1]. With the growth of data centres, it is estimated this figure would be at least 500MW by now.

A later review of this report carried out by SKM concluded that there was only 86MVA that was suitable for use for various reasons[2]. However, this is a very conservative figure due to the fact that the only sets considered were less than 15 years old. This is not a necessary limitation because all of the standby sets will have very low hours and the control system, which is the only part to suffer obsolescence, would be upgraded as part of the process.

A further study considered that there was 57MVA with “high potential” and a further 97MVA that was “possibly suitable,” giving a total of 154MVA, which with growth since that time would give a figure of over 200MVA[3]. The main reasons for the reduction from the original figure is fault current limitations in the CBD and also pollution problems with sets in high-rise areas exhausting at low level. Although, this is becoming less of a problem with newer buildings likely to have rooftop plant rooms.

Another identified problem in the reports was customers not agreeing to have their sets used in this way. It appears that this was partly caused by those doing the survey not being in a position to spell out the benefits to the customers.

Provided that benefits are clearly spelt out to customers, it is not difficult to convince them as benefits are considerable. Most standby sets never get tested against a typical building load. When a test is required it involves two interruptions, so as a result tenants and/or occupiers of the building will normally put pressure on the building manager to do this test out of hours or at the weekend. This is no test at all because during these periods there is very little load so the gensets never gets a proper, long test against full building load. This major problem has been recognised and many government bodies, (Victorian hospitals are an example) are required to have a full load test of the standby plant once a year by bringing in a load bank and running the set against it. This is extremely expensive and time consuming to organise and carry out, and still does not truly imitate the actual building load with air conditioners and lifts switching in and out.

When Auckland suffered an eight-week blackout in the CBD in 2008, it was estimated that 80% of the standby sets in the area failed during this period and further analysis showed that the main cause was the lack of regular, on-load testing.

This is not the only benefit for customers and if they are being asked to participate in demand management (DM) schemes using their own standby sets, then they need to be offered a range of benefits and financial incentives for the scheme to be viable.

To make their existing sets suitable for parallel operation with the mains a complete upgrade of the control system is normally required. This is largely low voltage control wiring and due to the advent of new digital systems the cost is not as high as what might be anticipated. A standby genset basically comprises of three essential parts – the engine, the alternator and the control and switching system. Typically, a standby set even one that is twenty years old, will only have run for less than 200 hours so the engine is basically still in brand new condition. It is quite probable that the engine is still in current production meaning that spare parts will be available for many years to come. Similarly, with the brushless alternator – it only has two moving parts (the bearings) so it will also be in brand new condition. The control system is a different matter.

The onset of digital controls and their continuous improvement means that the control system is probably out of date and many components may no longer be available. An owner does not want to find this out during a power outage.

So with a new control system installed the owner basically has a brand new genset fitted with the latest technology control system – and somebody else is going to help them pay for it.

of a typical modern conversion program is that carried out by ComAp in the QV1 building on St Georges Terrace in Perth. This is one of Perth’s landmark buildings and the 43-storey tower was designed by Harry Seidler. The roof plant room has 3 x 1.2MW 11kV Detroit standby sets which are now able to operate in full mains parallel configuration and the building owners have entered into a DM agreement with Western Power.

Another significant benefit for the building owners is that if there is a power failure of any sort then there is only one break in the power. When the mains comes back on, the set will synchronise with the mains and transfer the load back smoothly so that there are no transients.

If we extrapolate the NSW figures to other areas, a similar 200MVA figure would probably apply for both Melbourne (it also has CBD fault level limitations) and south-west Queensland, with lesser figures for Perth and Adelaide.

Interestingly in the latter report, where they examined many of the possible types of DM available, SKM concluded, “Of all the DM action categories, Standby Generation had the highest identified kVA demand reduction.[4]”

In the period since these reports, the estimates for the amount required to compensate the owners of the sets (i.e. the cost to the network) has been predicted or described more accurately. In the reports, the price ranged between $0-330/kVA, however newer technologies plus information form some recent installations would put the current price at $75-100/kVA.

Other more recent activities indicate a movement by the networks towards utilising sets in this way. Ergon Energy advertises on its website for standby sets to assist the DM, whilst Western Power have been running a DM program which includes standby sets for a number of years.

In NSW, the Australian Energy Market Commission (AEMC) is currently considering a rule change, requested by Sydney Council, to allow distributed generation (including standby sets) to receive a LGNC (local generation network credit) which would apply not just to Sydney, but nationwide.

This change in attitude by the networks has been brought about by their own use of mobile gensets. Prior to that, and as recently as the early 2000’s, any suggestion that customers should parallel their sets with the network was met by an attitude of absolute horror – the network would be destroyed and the sky might even fall.

However, as of about 2002; all of the networks started to invest in fleets of mobile gensets to parallel to the network on a daily basis. These mobile gensets take over the load, seamlessly and automatically whilst work is carried out on sections of the network. This is done to avoid power outages for the customer, to avoid the use of overtime for such work and to enable them to meet their SAIDI targets. As these sets and their operation became common, the networks realised that sets could be simply, safely and easily be paralleled with the network. Today, there are over 500 suitably equipped portable sets, ranging in size from 80kVA to 1.5MW utilised every day across the country. The sets can be paralleled with the network, as well as each other. When the demand is high, it is not uncommon for there to be more than ten sets in the configuration with a total power output exceeding 5MW.

This results in a true win-win situation as the networks have the satisfaction of reaching their SAIDI targets and their customers are unaffected by power outage.

There are many other benefits for the network operator. Firstly, due to the fact that most of the installed sets are diesel powered and the fast reaction times of standby sets (online within 30 seconds and fully loaded within 60 seconds) the sets can be utilised not just to deal with known and planned events (e.g. the temperature being over 40 degrees tomorrow) but also to assist with unplanned failures and outages.

There has been a great deal of publicity recently about the events in South Australia on 7th July this year, in which a power shortage resulted in a dramatic increase in energy market spot price. Imagine how different the situation might have been if there had been 10-20MW of standby sets available at short notice to support demand.

Diesel standby sets are dynamic and have inertia, which means they can play a role in providing ride through and contributing to fault currents in a way that solar and wind cannot.

Communications are a standard part of the new control systems and therefore the sets become immediately despatchable by the network or grid operator and can be online within 60 seconds from the time requested by the operator.

Perhaps one of the major features of this form of DM is that it is lower in cost than other forms of DM. In addition, it does not require any modifications or upgrades to the network.

The components required for the upgrade to the control systems are all off-the-shelf and the work required can be carried out in a relatively short time period so there are no major delays involved in adding this valuable form of DM to the network.

The concept of using standby sets for DM has been around for a long time. With new technology, the acceptance of paralleling with the network by the Distribution Network Service Provider (DNSP’s), the changing circumstances in the electricity supply situation and the advent of renewable energy; the use of standby gensets is becoming the next logical move.