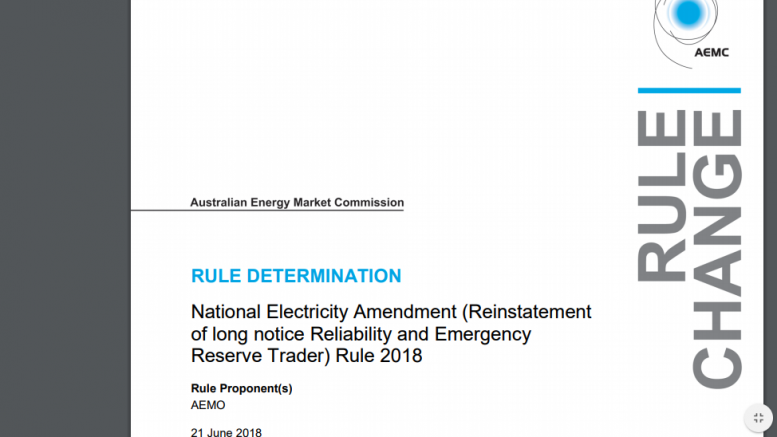 On 21st June 2018 the AEMC made a rule to re-establish the Reserve Trader in the NEM.

This rule change had been requested by the AEMO following the (previously organised) sunset of the original Reserve Trader mechanism.  This request ran in parallel with the AEMO’s use of the Reserve Trader over the hot summer 2017-18, including the triggering on 2 different occasions.

The AEMC notes that:

“> an increase in the procurement lead time available to AEMO to procure the RERT from 10 weeks to nine months ahead of a projected reserve shortfall (effectively reinstating the long-notice RERT) with effect from 13 July 2018
> a transitional rule that amends the RERT guidelines made by the Reliability Panel to reflect the reinstatement of the long-notice RERT and requires the Reliability Panel to publish the RERT guidelines amended to reflect the changes made under the rule by 13 July 2018 (the date the long-notice RERT is reinstated)
> a transitional rule that requires AEMO to amend its RERT procedures to reflect the final rule and amended guidelines by 13 July 2018. The rule requires AEMO to consult on the proposed amendments to its RERT procedures for a minimum of two weeks prior to the revised procedures taking effect.”

Further details about this consultation process can be found on the AEMC’s website here.

On Thursday 24th June 2021, the AEMO opened registration for Demand Response Service Providers (DRSPs).  We received an email about this, as would have any other WDR stakeholders known to AEMO. Organisations who wish to apply for registration for this…

Yesterday Drew Clarke – Chair of the Stranding Council on Energy and Resources, sent an open Letter back to Matt Zema Chief Executive Officer of the AEMO addressing; 1) a new option for demand side resources to participate in the…

Open letter from AEMO about implementation of a “Demand Response Mechanism”

Today Matt Zema – Chief Executive Officer of the AEMO wrote an open letter to Drew Clarke – Chair of the Stranding Council on Energy and Resources, addressing the ‘Implementation of Demand Response Mechanism (DRM) and a new category of market…