AEMO calls for Expressions of Interest for "Reserve Trader"

On Wednesday 24th May I was pleased to be able to attend the first day of the Annual Conference of the Energy User’s Association of Australia (EUAA) – an organisation representing many of Australia’s largest energy (i.e. electricity and gas) users.

It was not a surprise to me that there was a robust discussion about the future of large energy users in Australia, given:
1)  the way energy prices have risen, and
2)  rapidly rising concerns about security of supply.

Questions were raised about why the AEMO had not yet tendered for “Reserve Trader” (a form of Demand Response described here) – i.e. because it is widely understood that the forecast is for a tight summer 2017-18, especially in Victoria and South Australia (including following the closure of Hazelwood).

Quite a coincidence, then, that we noted the following advertisement the next day in the Australian and the Financial Review: 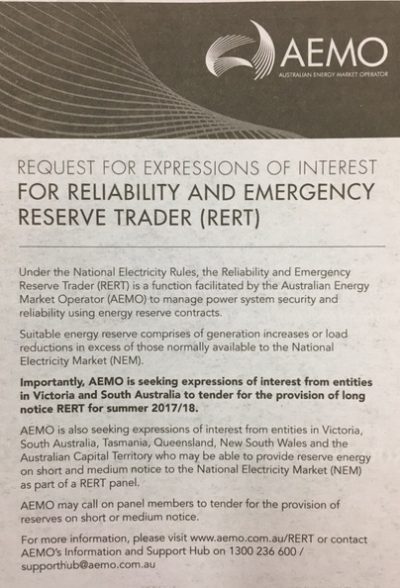 Further information is published on the AEMO Website at this address:

Some of the EUAA’s members, because of their ability to curtail large amounts of demand at short notice, might wish to consider responding to the AEMO’s EOI.

An announcement was made on Day 2 of the conference (Thursday 25th May) about this.

RERT Panel Agreement and Request for Expressions of Interest