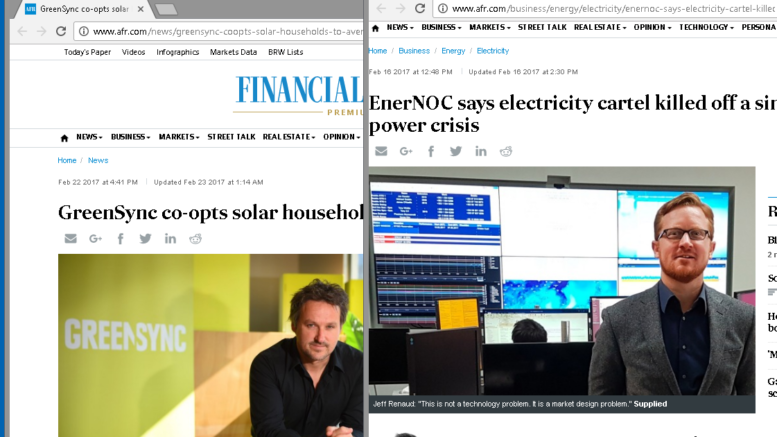 Frequent readers of our sister site, WattClarity, will have kept pace with the unfolding dramas stemming from a tight supply/demand balance in February 2017 – and in particular:

Wednesday 8th February = load shedding at the end of the day in (long-suffering) South Australia, following a day of extremes (and continuing a financial year of extremes) – with numerous articles including this at the time of load shedding and Allan’s analysis after (and specifically on Pelican Point).

Friday 10th February = very high demand levels in NSW, with two less-welcome forms of demand response activated at Tomago Aluminium smelter (one commercially driven, the other by the AEMO) – with this article at the time and Allan’s analysis after.

Sunday 12th February = very high demand levels in Queensland, especially on a Sunday – with this summary posted late on the day after a weather-induced demand drop (not demand response).

Following from this, we’ve seen a plethora of different potential/partial “solutions” being promoted in various media outlets by promoters of (or advocates for) their particular brand/flavour of solution.

As a keen supporter of Demand Response in the NEM (and perhaps the biggest facilitator over more than a decade, if measured by MW of response) we’ve been interested to see Demand Response mentioned as one of these particular solutions in a range of different articles:

1)  Today I read this article from yesterday in the AFR about the project Greensync is undertaking with various partners (Reposit, Mojo, United Energy and ActewAGL are mentioned – as is ARENA funding)

2)  Also getting a mention in the paper on Friday 17th February was EnerNOC, who restated their perspective that their particular preferred form of Demand Response, effectively incorporating the creation of “negaWatts” through a rule change, would have also helped (readers should note that we’ve also contributed some of our perspective today over at WattClarity)

We look forward to seeing the demand side grow more active and responsive – and hence contribute to efficient & effective balancing supply and demand.

Demand Response can play a role in this – however (in our view) it’s important that we don’t mutate the focus such that “Demand Response” (or any other of the potential/partial “solutions”) becomes an end unto itself – as that risks leading to unintended consequences.

What role might Demand Response play in a (possible) future grid featuring high levels of intermittency?

Earlier this week Paul McArdle posted an article to WattClarity after speaking at All-Energy in early October. His presentation (with narration included) from the conference is available here: