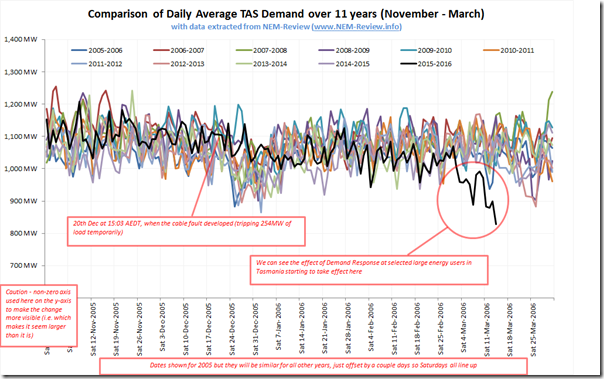 Earlier today Paul McArdle from WattClarity published this article which commented on Tasmania’s unfolding energy crisis. Paul mentions that some of the biggest energy users in the state are helping to conserve precious water supplies by agreeing to some substantial reductions in electricity consumption in what can be described as ‘an unwelcome form of Demand Response’. After negotiations with the Premier and Hydro Tasmania, some of the energy users being asked to reduce their load include Bell Bay Aluminium, Tasmanian Metallurgical Company (TEMCO) and Norske Skog.

Pitfalls of Demand Management for the Domestic Electricity Consumer

On Monday, engineering consultant Mervyn Davies posted this article on WattClarity outlining the pitfalls of several different potential demand management schemes. In his article he contrasts and compares Time of Use Demand Tarriffs, Time of Use Energy Tariffs and Controlled…

Global-Roam to speak at All Energy pondering demand response

Ahead of his speech at the All Energy Conference in October, Paul McArdle from Global-Roam has posted this article to WattClarity detailing and explaining some unusual activity in South Australia last week.